40% of the Brookvale Five.
These two boards are owned by the same person.
They are only in for repairs.
But are worth showing.
Both are in very good condition,
and are good examples of the way things
were going in 65/66 and early 67.
In regard to outlines, rails and foils.
Posted by PLATTY at 12:10 AM No comments:

A COUPLE OF SINGLES 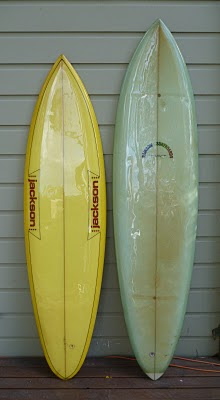 A couple of singles ready to go home.
The Jackson on the left was shaped by Jim Parkinson.
The board on the right is a Rainbow.
Built at Woy Woy on the NSW Central Coast.
Posted by PLATTY at 12:40 AM No comments:

This board has been laying in its owners backyard
for who knows how long.
To short and to new to ride in old mal comps,
it was left in old mal limbo, waiting for the right moment
to be remembered.
That moment came thanks to its owner reading
Bob McTavish's book "Stoked"
The penny dropped.
I think I've got one of those "Plastic Machines"
laying around in the back yard somewhere.
http://www.surfresearch.com.au/mkeyo.html 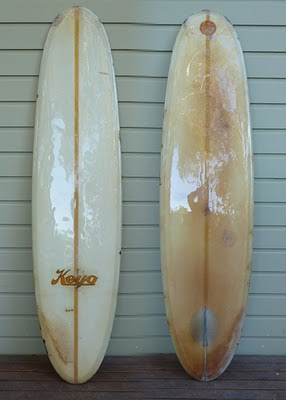 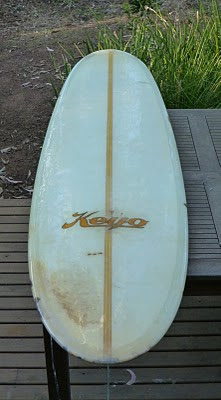 It's got a bit of the "pig" in it.
A high density foam stringer.
Unfortunately no shapers initials are visible. 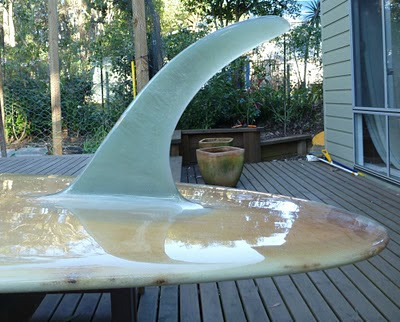 For some reason some colours on  these old G&S logos fade.
This board was only in for ding repairs. 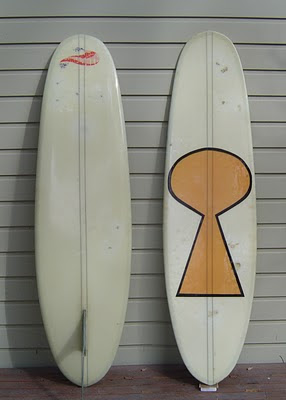 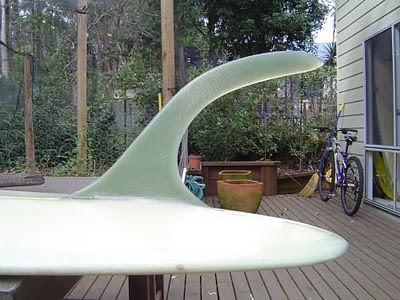 This is a 5'8" x 19" double flyer single fin
I restored almost 12 months ago. I neglected to it post back then. 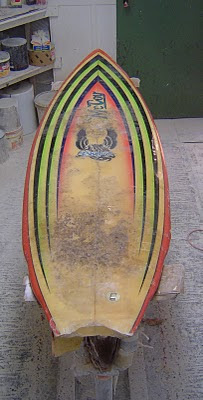 This board was in need of some TLC. 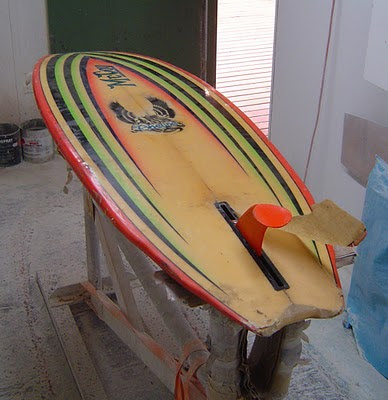 As you can see, the tail has been neglected.
Apart from the tail the rest of the board was in fair condition. 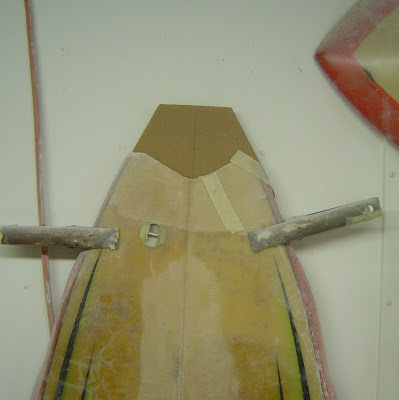 The deck under the back foot had delaminated,
poorly repaired, and delaminated again.
A cardboard template was made to work out
the tail shape at 5'8" 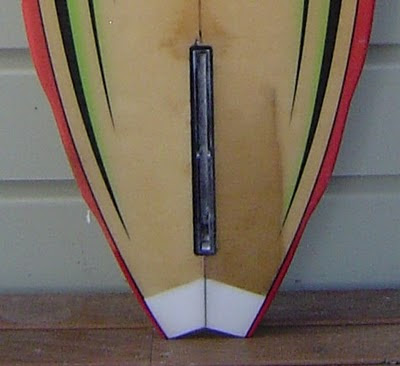 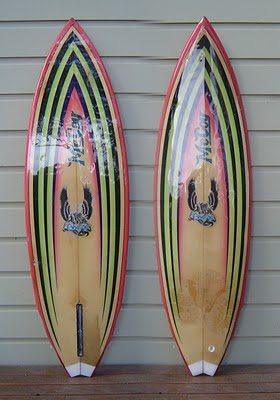 Re glossed and polished.
Finished ready to ride again.
Posted by PLATTY at 1:01 AM No comments:

When I first saw the logo on this board from a distance
I thought it was a Norm Casey.
It Turns out that Peter Clarke
took over the business from Norm Casey in 1965.
More info via. http://www.surfresearch.com.au/mp.html 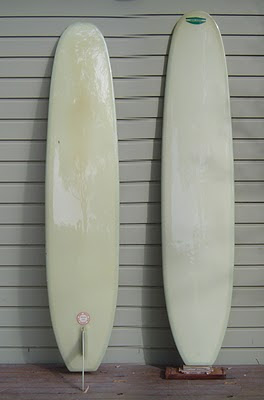 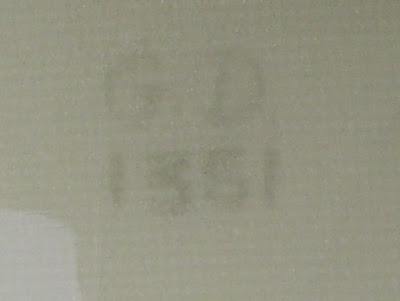 Cambered bottom almost V through 3' to 4 1/2' from tail.
The deck has a fair bit of camber also.
This board has spent most of its life in a shed.
It only had a few dings on the rails that needed repairing.
Sadly it is returning to the shed. 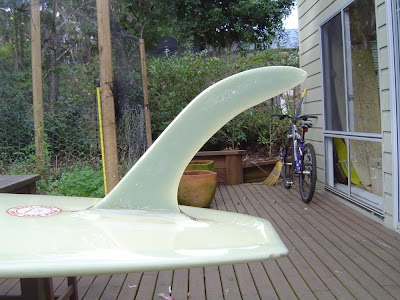 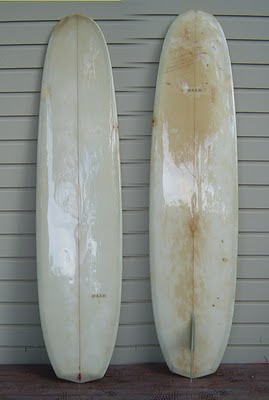 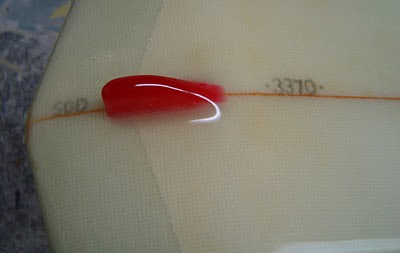 Pre resto.
This board had something painted all over it. 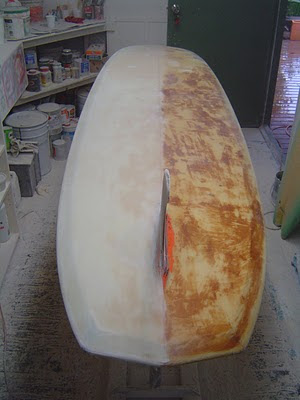 It didn't take much to sand it off.
But boy it stunk. 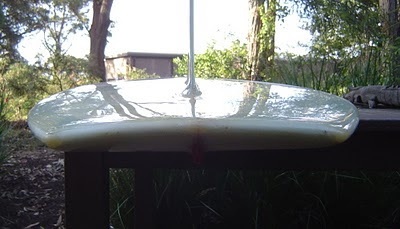 Rolled V through mid section.
Blending to a flat V through the tail. 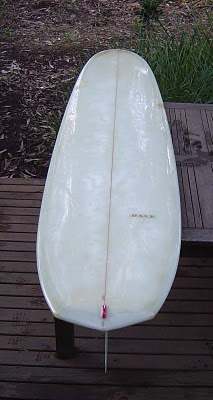 These boards definitely have that piggie look.
Posted by PLATTY at 12:52 AM 1 comment:

This is the third Keen Davis that I have restored. 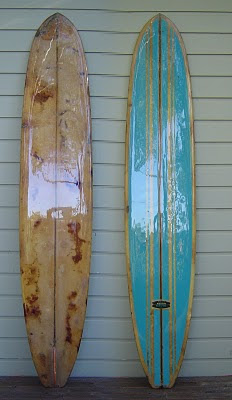 This board is a one owner board.
It has had its fair share of dings.
Mainly on the bottom toward the nose.
And around the rails.

Check out,
http://www.surfresearch.com.au/mk.html
for a bit more info.

The deck had to be sanded by hand
to avoid sanding through the original pigment work.
You can see how green the blue pigment has become over the years. 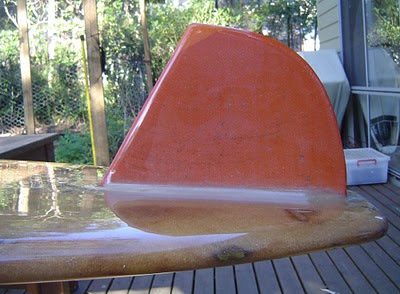 Chopped strand matt fin.
Covered with a couple of 10oz.
Posted by PLATTY at 12:34 AM 2 comments:

This is a label owned by Bill Cilia (Nirvana Surfboards) 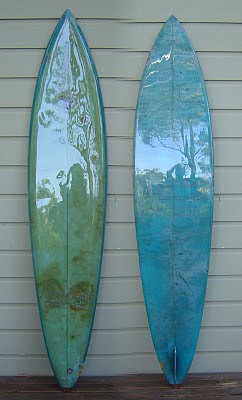 This board is 7'5"
I would say it was built in the early to mid 70's.
I will confirm.
I spoke to Bill on the weekend.
Bill said that the board would have been one of the first
boards built under this label.
Probably 73/74.
The logo is an old AGE surfboards logo.
http://www.surfresearch.com.au/00000042.html 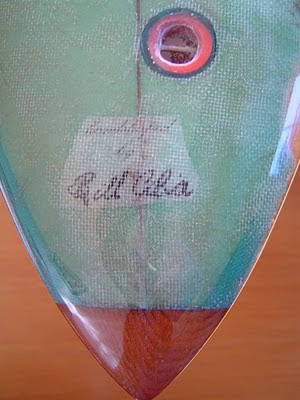 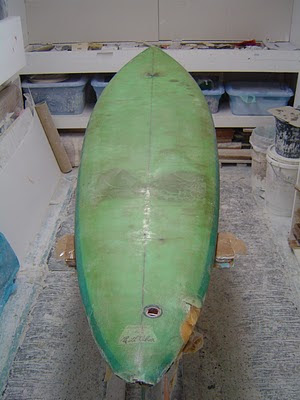 Some delams were re bonded on the deck.
The two dark areas on the deck are previously re bonded delams.
A cedar tail block was fitted. 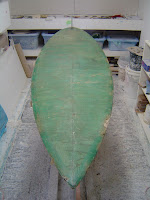 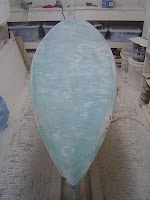 The bottom was covered with stressies from nose to tail.
These were sanded back to the glass.
Any dings and lows on the bottom and rails were repaired.
Then the bottom was re glassed with a layer of 6oz.
This was lapped around the rails onto the deck.
The deck, apart from the delams was in pretty fair condition. 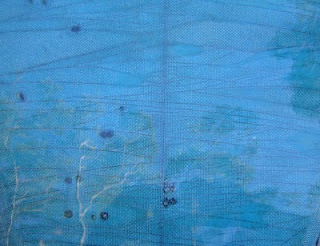 Posted by PLATTY at 7:13 PM No comments:

Just started.
This is another SOD shaped Dale.
Check out
http://dpsr-behindthescenes.blogspot.com/
for updates on the restoration.
Posted by PLATTY at 12:22 AM No comments: 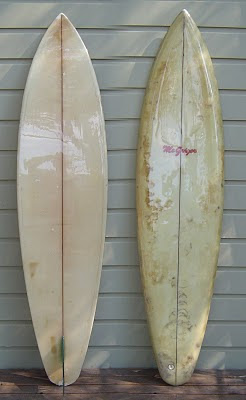 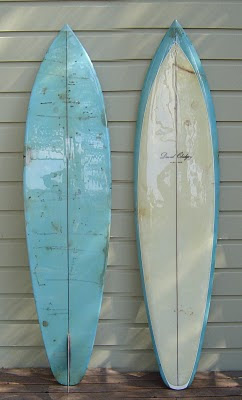 Just finished.
A couple of 70's single fins.
The owners of these boards
are not into hiding all the dings etc.
It all adds to the character of the board.
Go to
http://dpsr-behindthescenes.blogspot.com/
to see images of the restoration work.
Posted by PLATTY at 8:16 PM 2 comments: