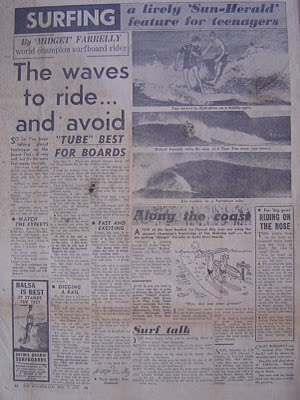 This is a page from The Sun-Herald
November 3. 1963.
It was found under a lino floor, in a kitchen that was being renovated. 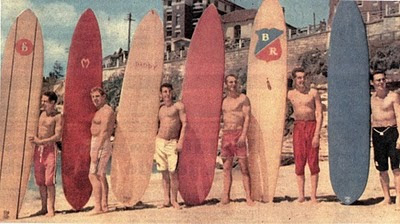 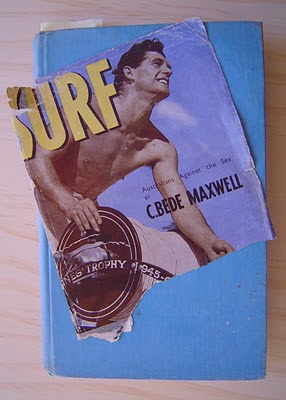 This is one of my old books.
SURF
Australians Against the Sea
BY
C.BEDE MAXWELL
First published 1949
Here is an exert.
"In 1907, the Outrigger Canoe Club of Hawaii was formed. It has since become famous, and it expressed object is to “give an added and permanent attraction to Hawaii, and to make Waikiki the home of the surf-rider”. Here was fostered the uncanny skill of young Duke Kahanamoku, of Sam, his brother, and dozens more, so that presently Zero Break no longer ran lonely, but carried heroes again as old.

Travellers brought tales of these back to Australia and inevitably attempts were made to navigate the local surf in what was hoped the same fashion. The first attempts were of the crudest; world title holder, Alick Wickham, who introduced the crawl stroke to Australia, made his “surfboard” from a length of driftwood picked up at Curl Curl. The Bell brothers, Frank and Charlie, of Manly, spent crazy hours on a narrow outhouse door in Freshwater surf. Fred Notting painted a brace of slabs and named them Honolulu Queen and Fiji Flyer; gay they were to look at, but they were not surfboards.

Then, in 1912, C.D. Paterson, returned from a world tour with a real surfboard from Hawaii; a solid, heavy redwood slab that no one could manage in the rough surf at North Steyne. It was handed down to the other end of the beach and there men like the Walker Brothers, Steve Mc Kelvey, Jack Reynolds, Fred Notting, Basil Kirke, all but turned themselves inside out and upside down to master its management". 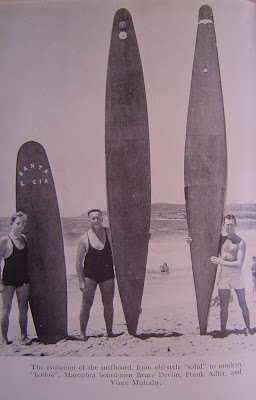 The caption says.
The evolution of the surfboard,
from old-style "solid" to modern "hollow".
Maroubra board men
Bruce Devlin, Frank Adler, and Vince Mulcahy. 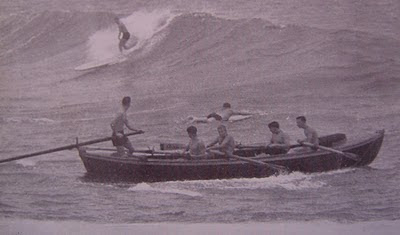 A nice run in at Manly.