This is a pretty refined Gordon Woods.
With the large GW on the bottom.
I think 1965/66. 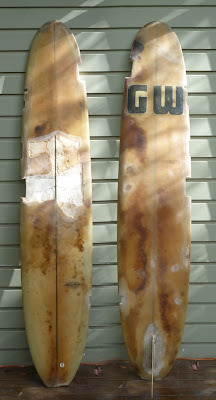 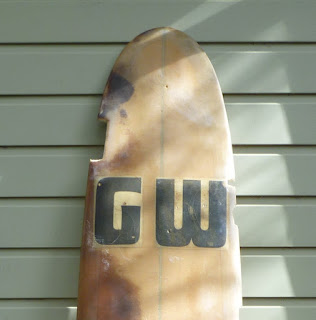 I've restored a number of boards for the owner.
He likes to contribute to some of the work involved.
So it has been travelling between the two of us for
close to 12 months. 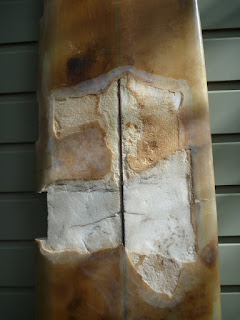 So the two images above is how it was
when I received it.
Glass removed, rail dings cut out
and dings sanded ready for glassing. 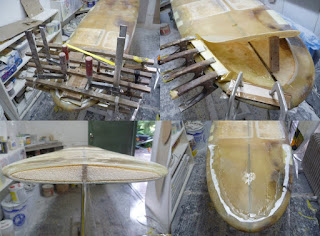 There was a large delam on the bottom nose.
This was prepped and re bonded.
The pod was badly damaged.
A cedar tail block was added. 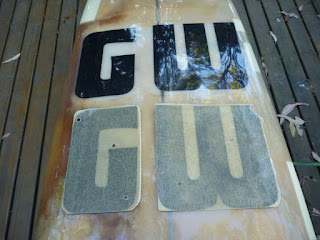 The large original GW on the bottom
had delaminated and had been pumped full of resin
in an attempt to re bond it.
This resulted in the logo being pumped up above
the level of the bottom of the board.
As it wasn't clamped or weighed down.
It was removed and replaced. 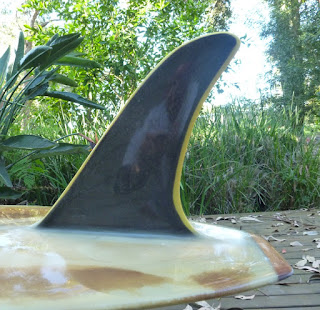 The 12" fin was removed and a large
delam underneath was re bonded.
The CSM fin had two layers of 6oz added per side.
Cleaned up and reset.

The board has a really nice bottom curve
and semi pinched rails. 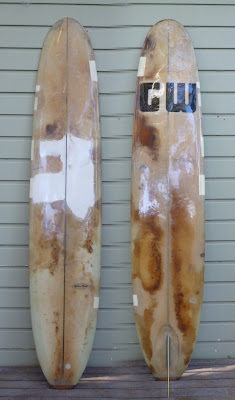 Finished.
The gloss coat was wet & dry sanded
by the owner, returned and polished by me.
The main objective was to get the board
back in the water. It was heavy to start with
and with all the work done there was a worry
that would become to heavy.
So no pigment work done on the obvious repairs
in an attempt to keep the weight down.

Young Sydney surfer
Keyo Rhodes
and the GW at the
2015 National Old Mal titles at
Crescent head.
Posted by PLATTY at 9:47 PM