Sweet Country Corn was a brand built by Bill Cilia (Nirvana Surfboards) while he was working at Shane Surfboards in the 70's. Bill can't remember how many boards he built under this label. But he does remember how he came up with the name. The story goes that Bill was sitting down with Shane one day at the factory and they were discussing what name he could use on these new boards. At the table was a can of Sweet Corn.

This board had a basic restoration. Dings repaired, gloss and polish. 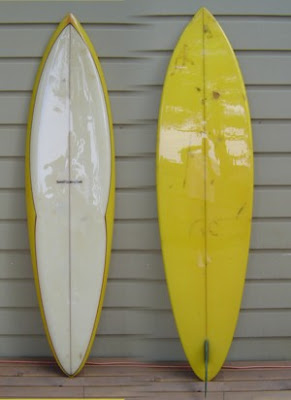 Posted by PLATTY at 8:46 PM No comments: 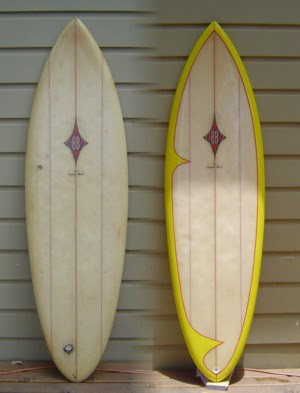 This board was shaped by Russell Head. Late 70's early 80's. Single timber centre stringer with two resin glue up stringers added. As seen in the original photo the deck is in good condition. With only two areas that needed covering. The ding on the left rail and the area where the old legrope plug had been removed.
Posted by PLATTY at 7:45 PM No comments: 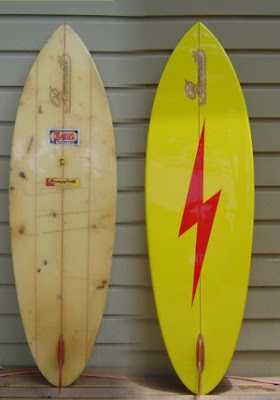 Unfortunately the bottom was not in the same condition as the deck. Plenty of dings, and a number of stressies needed repairing. Once the dings were sanded, the bottom was sanded and filler coated. The whole board was fine sanded and painted. Red pin lines and lightning bolt added. Clear coated, wet and dry sanded and polished.
Posted by PLATTY at 7:23 PM No comments: 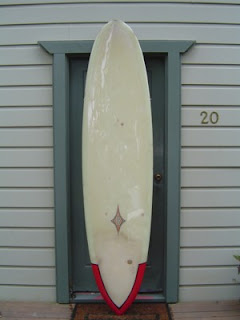 There seems to be a fair few of these boards floating around. This one is the third that I have restored. The last two were shaped buy Geoff McCoy. Some body had set fire to the tail of this one. So the area behind the fin was pretty much destroyed. That is the area where Geoff McCoy had initialed and printed the basic dimensions on the other two boards.
Posted by PLATTY at 12:34 AM No comments: 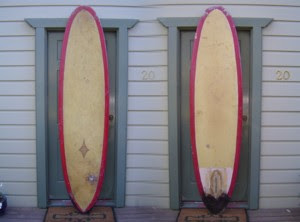 These two photos show the board pre restoration. The rails had been painted and some crude repairs had been attempted around the fin. You can see the black, burnt glass in the photo of the bottom.
Posted by PLATTY at 12:33 AM No comments: 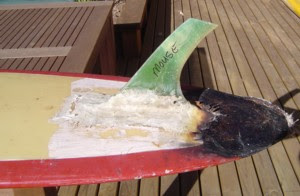 A new fin had to be made. As the original was beyond repair. 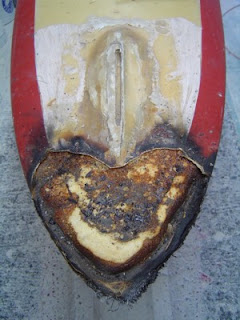 The glass around the fin was also removed, and the whole area was rebuilt.
Posted by PLATTY at 12:27 AM No comments: 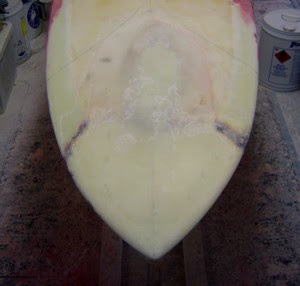 The tail is now ready for the pigment laminate to hide the repairs. 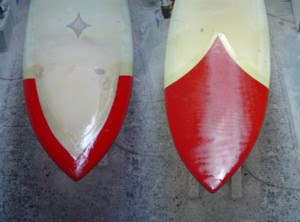 The pigment laminate with cut laps has been capped with a layer of 4oz. The new fin was then set on top of the 4 oz. The whole repair was filler coated. All the other dings were repaired, and the board was sanded ready for glossing.
Posted by PLATTY at 12:22 AM No comments: 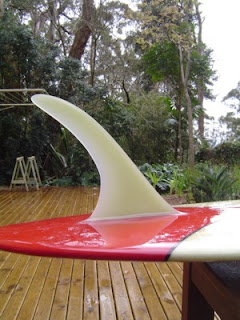 The new fin was made using 10oz Volan glass and general purpose laminating resin. The GP resin was used to achieve the old look. The template is from the original fin.
Posted by PLATTY at 12:18 AM No comments: 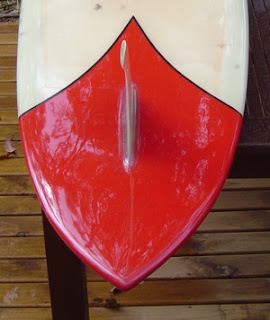 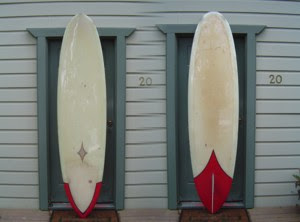 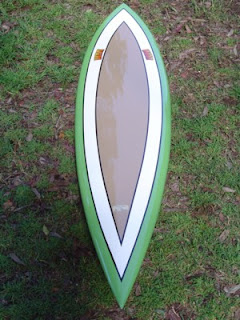 This board is a WM (William Morton) Tracker. It was shaped by Vic Elliott. WM Surfboards was located at 58A Cumberland Road Auburn Lakemba NSW 1967 to 1969. William Morton was glasser and shaper. He was previously employed at Ron Surfboards with Geoff McCoy. They later formed M and M Surfboards, Auburn NSW. The rest is history. The dimensions are 7'8" x 19 3/4" x 3'' The nose is 13" and the tail is 8"@ 12"
Posted by PLATTY at 1:19 AM 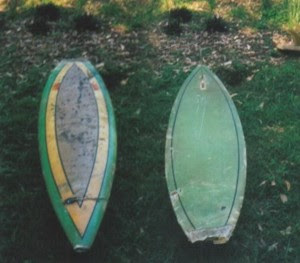 The board was in a bad way when I received it. To most people it would be rubbish, after all that is where it was found, on a garbage pile. An eight-inch section of the nose was missing and three inches of the tail was also missing. The original fin box was still in the board but somebody had crudely bonded a fin into the box with resin. The deck had a number of areas that had delaminated and it was covered in dents and dings. The whole board needed to been sanded to prepare for the ding repairs. Once sanded, the nose and tail areas were prepared for the new foam. The old fin box was removed and the resulting hole was filled with foam. The nose and tail were reshaped and everything was glassed. As the board was going to have a full colour job all the dings needed to be glassed to stabilise the dinged areas. Then they could be filled with a 75/25 mix of Q-cell/ Aerosil. The next process was to sand and fair and a layer or 4oz applied over the filled areas. The rails were in such poor condition that after being faired two layers of 4oz was applied to the entire length or both rails. The delaminated areas in the deck were removed and the areas re glassed, filled and faired. The section of glass with the shaper’s logo on it was cleaned up and reglassed into the board. The dents in the deck were filled with a wet mix of chopped glass and resin and two applications were necessary to fill all the dents. I had not tried this before and I will certainly use this method again as it worked well. It does add some weight, but as this board is going to be a wall hanger the added weight is not a major consideration. Normally if there are a small amount of shallow dents to fill I’ll use straight resin. But because of the amount and the size of the dents and the amount of camber in the deck, something with a little more substance was needed. Q-cell / Aerosol was another option but I thought it would be a good opportunity to try the former method on this occasion.
Posted by PLATTY at 1:16 AM

The paint used was thinners based auto acrylic. This was thinned 1:1 and the TCC was thinned at 1.5:1 The gun used is an Oldfield’s 60T electric airless. It is pretty basic, but it did the job. Any orange peel or overspray dry spots easily sanded out.
Posted by PLATTY at 12:45 AM 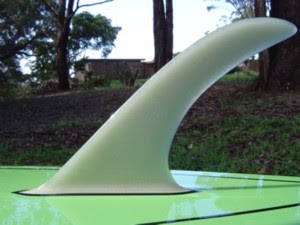 A new fin had to be made. This was constructed from 10oz-boat cloth and surfboard-laminating resin was used. The template is from a “Hohensee” tracker that I own. This was glassed onto the board.
Posted by PLATTY at 12:44 AM 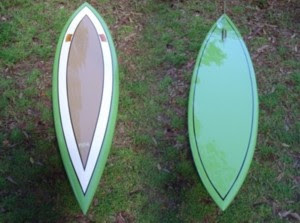 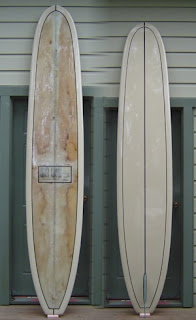 This board is a Egan "Custom Model" It was made in Newcastle NSW by Sam Egan. Sam Egan is still shaping today. This board was in very poor condition. The glass on the bottom has been removed. The stringer has fallen out, but is still with the board, as is the original fin.The exposed foam has weathered away somewhat and was about 10mm lower than it was when the board was shaped. The logo on the deck has delaminated, and will be removed and re bonded to the board. Its dimensions are 10' x 22 1/2" x 3 3/4" The nose is 17" @ 12" and the tail is 15 3/8" @ 12" The pod is 6"
Posted by PLATTY at 10:56 PM 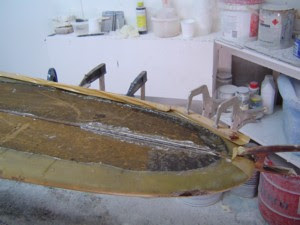 There were a few sections along the rails that had to be re bonded.
Posted by PLATTY at 10:20 PM 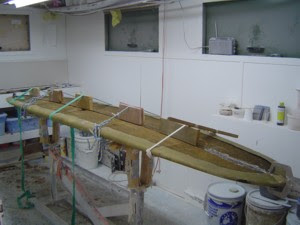 The original stringer was in good enough condition to reuse. Only a small section at either end had to be replaced.
Posted by PLATTY at 10:18 PM

CLOSE UP OF BOTTOM 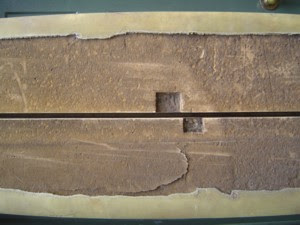 This is a close up of the bottom showing the poor condition of the foam.
Posted by PLATTY at 10:14 PM 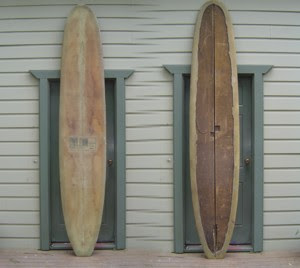 This photo shows the board prior to restoration
Posted by PLATTY at 10:11 PM 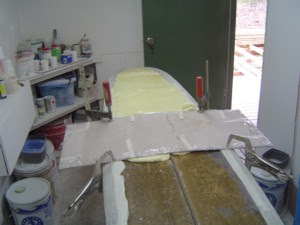 Due to exposure to the elements for some years, the foam on the bottom of the board has eroded away. Leaving a 10mm deep void along the length of the board needing to be rebuilt. Two pack expanding polyurethane foam was used to fill the void
Posted by PLATTY at 6:31 PM

As with most old logos, this one was also delaminated. There was also a ding that needed repairing under the logo. You can see the damage to the logo between the S and the A. After the ding was repaired and the edges around the perimeter of the logo were cleaned up, it was re bonded to the board.
Posted by PLATTY at 11:45 PM 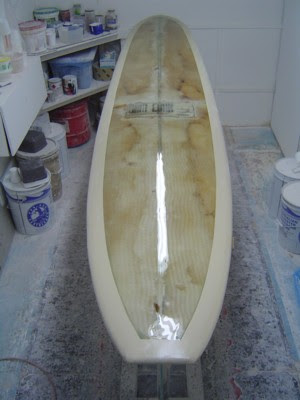 After the pigment work on the bottom was completed the deck was glossed.
Posted by PLATTY at 11:44 PM

A pinline was applied to highlight the logo. The area damaged by the ding was touched up with a water based Posca pen. 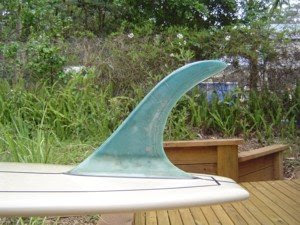 The fin was originally set into the board. As it had been removed prior to restoration. It was cleaned up and reset. 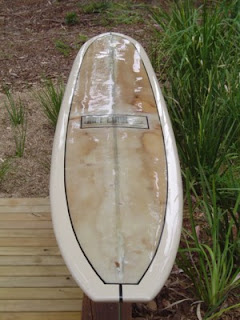 Pinlines were added and the board was wet & dry sanded then polished.